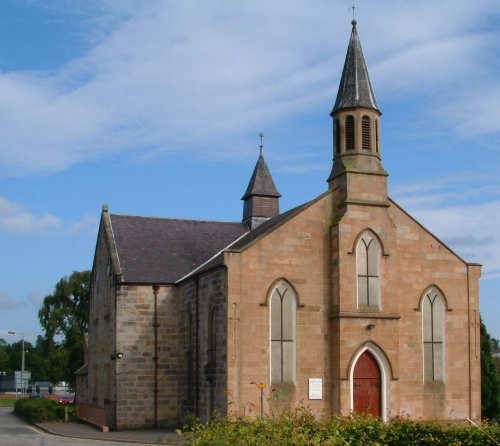 St John's Church of Scotland, Carluke, is one of three congregations of the Church of Scotland (the others are Kirkton and St Andrew's), which between them serve the town of Carluke and outlying farms and villages such as Kilcadzow and Yieldshields.

St John's was born out of the Disruption of 1843. Starting as a small group of seceders worshipping in a local inn, the Free Church in Carluke became the United Free Church of St John's in 1900. Reunification of the church came in 1929, when St John's became, as it is now, the Church of Scotland congregation of Carluke St John's.

Although each church has an 'official' parish, covering about a third of the town, their memberships are drawn from the whole area, and beyond.

There has been, in the past, much co-operation between the three congregations and, in 2005 moves were made to set up a more formal Parish Grouping arrangement which will see closer bonds between them and more effective Christian ministry in the town.

The churches of the Parish Grouping also work closely with churches of other denominations in the town, including Roman Catholic, Baptist and United Reformed churches.

With the retiral of Rev Roy Cowieson in June 2013, St John's became vacant and in December 2013, St John's and St Andrew's churches agreed to enter a Deferred Union of their congregations.

In February 2016, Rev Dr Elijah Obinna was inducted to the charge of Carluke: St Andrew's in deferred union with Carluke: St John's.  He will be the minister of St John's until that union comes about.